I have a solar globe on my front porch. The concept is simple -- during the day it absorbs enough energy to recharge the batteries, and at night it uses the battery power to glow. It stopped glowing in early November, however. The afternoon late fall and winter sun in the far north is not strong enough to charge the batteries.

Last night I went outside, and saw that the globe was a glowing. Not brightly, but still, there had been enough solar power to get the job done.

The sun is returning.
Posted by Dragonwriter at 6:03 AM No comments:

More From A Shoggoth on the Roof

To Life! Usually a good thing, except...
Posted by Dragonwriter at 9:05 AM No comments:

A Shoggoth on the Roof

A Fiddler on the Roof tells a dark story in a lighthearted way. At a time of oppression for Russian Jews, a poor man is faced with the problem of finding husbands for his daughters. Dire events are alluded to, but overwhelmed by the catchy songs. At the end, when the village is broken up and the people driven away, the various characters tell hopefully of their next destination -- but if you think about what happened to the Jewish people in each of those destinations, the happy ending takes on a dire future.

In light of the inner darkness of this happy musical, A Shoggoth on the Roof is strangely appropriate. In this musical, the songs of A Fiddler on the Roof are parodied as the setting is switched from a little town in Russia to Arkham, MA. I will admit that I have not seen the musical, and have listened to only the opening song of the musical, but the quality of the recording and preformance is excellant.

You can order the CD of all the songs at: http://www.cthulhulives.org/musical/cdinfo.html
Posted by Dragonwriter at 3:58 AM 3 comments:

Terry Pratchett is well-known for a series of books which take place on Discworld, which is a flat disc supported by four elephants which stand on the back of a giant turtle, which swims slowly through the cosmos. Magic is more reliable than science in this world where anything can, and usually does, happen. There are gods everywhere, most of which are flawed, but well-meaning in their flawed ways, just a bit more immortal and powerful than the rest of us.

This book is not set on Discworld.

It is, in fact, set on a world just a little different from our own, with magic and beliefs and physics very much like our own. In this world, in a place very much like our South Pacific, in a time very much like our Victorian age (but not quite) a volcano explodes and the resulting tidal wave devastates the surrounding islands. Afterwards, the survivors must survive further, tackling the issues of food, shelter, and rebuilding, as well as the bigger issues of why did this disaster happen in the first place, and how does one go on when has lost everything? The first order of business is finding the other survivors. The last order of business is taking the lessons they have learned forward into new lives.

This is not a whimsical or comical book, as so may of Terry Pratchett’s books are, but one that explores faith and belief, and how they shape a person’s world. Don’t get me wrong – Terry Pratchett is no fan of religion. But in this book he shows the difference between faith and religion, and why he considers the former to be the stronger of the two.
Posted by Dragonwriter at 2:17 PM No comments:

Today's offering is another bit which I'm adding to my SF novel. Dutch is facing his own betrothment, and flashes back to a couple of other incidents, including this one:


Seven-year-old Dutch, his face still puffy from the attack in the alley, clutched his mother’s hand as she marched down the strip. She was wearing her dancing clothes, and had covered her hair and skin with glitterdust. Odd, because she hadn’t been working yet, and odder still because she had insisted that Dutch wear his best clothes.

They came to a crowd clustered tight around a screaming street preacher. Normally his mother would have crossed the street, but this time she pushed into the crowd and forced her way to the front.

The preacher, a tall man with an earnest look on his dark face, noticed her. "Daughter of Satan! Child of temptation! Turn back, before you bring destruction on all around you!"

"I didn’t come to repent," his mother said.

"Then why are you here?" His voice roared.

"I am a wanton woman, Hosea. I dance for men and incite lust in their hearts." She tossed her hair proudly.

"And who is this child?"

"Proof of my unfaithfulness."

He paused and cocked his head. "What is your name, Daughter of Satan? What shall I call you?"

Dutch frowned. His mother was called Cece by her friends, and Cecelia by her family, not Gomer. It wasn’t a pretty name.

But Hosea seemed impressed. "Will you always be an unfaithful woman?"

"As unfaithful as I am now."

"Then you will be Gomer. Come, stand in my shadow, woman, and when the children have been fed, we will talk."

"No just man would take the ass and leave the foal," Hosea replied. "My cloak will cover you both."

Dutch’s mother pulled him to the steps behind Hosea and sat him down. And there Dutch heard the first of many sermons on the sanctity of the wedding bed, and the faithful of a wife to a husband. And he puzzled – if faithfulness was good, why had the preacher like his mother’s promise of unfaithfulness?
Posted by Dragonwriter at 7:27 AM 2 comments:

If this keeps up, we'll have to designate the windstorms by month and year. We had another windstorm last night, an event rather identical to the one last September. This time, however, the winds howled all evening and night, finally stopping in the wee hours just before dawn.

I did not sleep well.

I can only imagine what it was like in the Dust Bowl, when the wind would howl like that for days. It's a steady roar, like the sound of a jet engine from the airplane terminal, but it never stops. It never pauses. One can only wonder where so much wind can come from.

But just before the wind hit, as the front was moving over us, I caught this picture. I am facing South in the photo, and the sun is setting. To the east, on the left, is the dark cloud cover brought by the approach of the front. To the west, on the right, is the clear sky and patches of cumulus clouds which follow the front. The gold is from the setting sun. 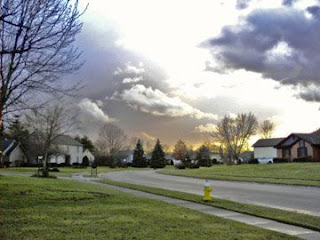 Posted by Dragonwriter at 5:58 AM 3 comments:

Cat in a Couch 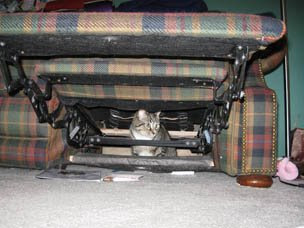 We have a recliner couch -- the seats on the end open up and recline.

This cat has an obsession.

The other day, I was searching for some lost item, and so opened up the recliners, looked beneath them, and closed the couch back up. An hour later one of my daughters sat down, and was started to have a paw poking her from underneath the couch.

Solo Meow was not hurt, nor discouraged from going back into the couch.
Posted by Dragonwriter at 8:08 AM No comments: