An excersize in futility...


Please comment yay or nay if this video shows up for you. Please add your browser to the comments. Thank you.
Posted by Dragonwriter at 12:24 PM 2 comments:

Serpent Mound, in Southern Ohio, was built about a thousand years ago by a mound-building Native American Civilization. It could have been the Adena or it could have been the Fort Ancient Indians. Unfortunately, when those civilzations fell, they took their verbal records with them, including the significance of these structures. There has been much speculation, however. 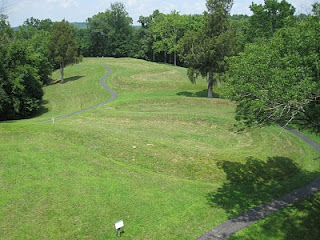 The structre itself is a quarter-mile long snake. It's best seen from above. I climbed a tower, much like a park ranger's fire tower, to take this picture. You can see the body of the snake undulating back and forth under the grass. It rises about four feet high from the surrounding field. Examination of the structure under the grass showed that it was built from hard-baked clay that had been filled with gravel, and then dirt was put over it. Grass and plants were allowed to grow in the covering dirt, making the structure a part of the earth.

The snake appears to be biting into an egg-shaped circle. There has been much speculation about the significance of this, but without the verbal knowledge, we don't know anything for sure.> 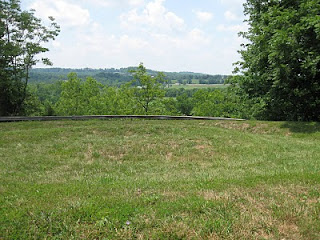 This shot is taken across the curled end of the tail. 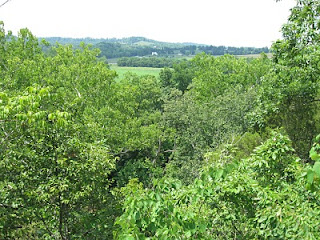 This shot is taken from the mouth forward, and across a river valley.

What I find significant about this structure is that snake is either pointed into the impact crater, or runs along the edge of it. Because the crater has been covered with forest over the years, it is not easy to see -- except in the rocks and the trees. Different types of trees like to grow over different types of bedrock. In this area, the forest is a patchwork of these trees -- apparently the bedrock was thrown up and flipped over in huge chunks. This is called a cryptoexplosive structure, and is seen with both volcanos and impact craters. While the Native Americans might not have seen the crater itself, I'm sure they recognized the oddness of the forest and marked it as a special site. 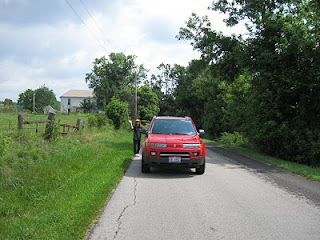 To get to Serpent Mound, we had to drive through very rural Ohio. Our GPS, GLaDOS, named after the killer computer in the Portal game, insisted on taking us along backroads. At this point, the road was barely wide enough for two cars to pass. We saw bridges that were narrower. We were also warned, by a sign, that we were in a cow crossing area. 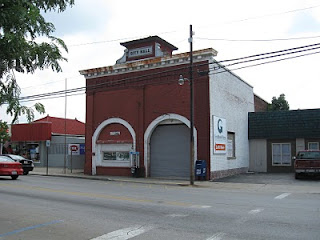 I took this picture in the town where we ate lunch. It appears to be the fire station. And City Hall. Though if it is both these things at the same time, I do not know.

Posted by Dragonwriter at 7:03 AM 2 comments: