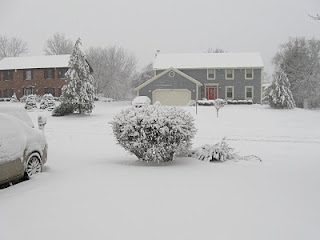 We're in the midst of our second major snowstorm in a week. The first storm, which arrived Friday night, put 6.5 inches on my driveway. That snow didn't even think about melting before the current storm rolled in. We've got about three additional inches out there, with another four or five expected before this is all said and done.

February is a snowy month in SW Ohio. We tend to get our biggest snowfalls in that month. This has been a snowy winter for most of the midwest and the east coast, but we've escaped with a dusting and a few flurries. Until now. Even then, we're still getting far less than my friends in Philadelphia. What we measure in inches, they have been measuring in feet. And while snowstorms are an annual event here, they are rare in Philadelphia.

At least we have full-sized snowplows. 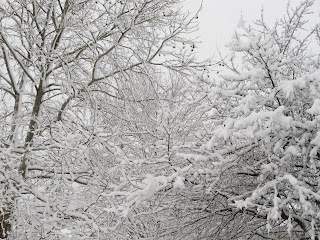 In NW Louisiana, where I spent most of my school years, snow hardly ever happened. When it did happen, it came stealthily in the night. We would wake up to a bare covering of snow. If the snow stuck to the pavement, we had a snow day and could stay home from school. Without any treatment of the roads, even a small amount of snow made them dangerous and slick.
That's our story, and I'm sticking to it.
Up here, in order for the local schools to close, we have to have a blizzard or around six inches of snow on the roads. The streets have to be not just slippery, but downright dangerous. Steve started to go into work today, then turned around and came home. 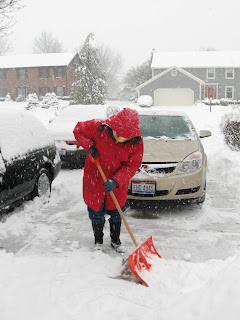 Despite all the inconvienance, there's still something magical to me about the snow. I love to watch it fall, and remember with wonder the first time I saw it fall in the daytime. It was in the late Seventies, when I was in high school, and very possibly part of the same storm that is mentioned here in Ohio with the same sort of respect and fear that one uses for natural disasters. For me it was just an amazement, being able to stand in the yard with my snowman and watch fluffy white chunks drift out of the sky.
It's certainly drifting now.

Posted by Dragonwriter at 6:48 AM No comments: