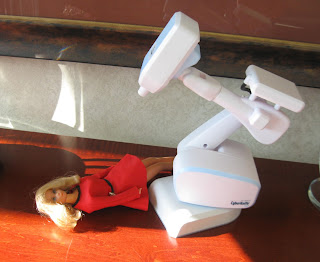 I made it through Radiation Therapy without too much problem. Yes, I got tired, terribly, deeply, bone-deep tired, but after six weeks that was gone. My skin turned red, as if with sunburn, but that faded, and it never became worse than that. Some women have a lot of blisters and sores from the treatment, but not smoking and not getting suntans all my life paid off. There was one small spot, however, that turned redder and took longer to recover, and I recognized that it was the area where I had been badly sunburned, multiple times, in my early teenage years. Thirty-five years had passed, but still, that spot was more susceptible than the areas that had been covered by my swimsuit. Still, by not having previously damaged skin, for the most part, I could recover a lot faster and lot easier with little permanent damage.

The same, unfortunately, could not be said for Barbie.

I took her with me to illustrate the Cyberknife, which is an improvement on the One-eyed monster. With a much narrower beam, the Cyberknife can deliver radiation with surgical precision, and thus can also deliver higher doses that affect just the tumor. Greater flexibility of the head, with six degrees of movement, means that it can also follow the irregular outlines of the tumor, and can hit the same area of the tumor multiple times in one session while passing through different overlying tissues. The Cyberknife can be used as an alternative to surgery in certain cases, by shrinking and sometimes completely destroying tumors in situ.

Barbie seemed to tolerate her treatment. When I got her home, however, and moved her legs, I heard an unusual crack. Then her legs hung oddly. So I had to take off her dress to see what was going on, and her panties – and found them melted to her crotch. When I pulled the material away, gently, her legs fell off.

I've had that Barbie for over forty years, and didn't want to just throw her away, so I collected all the bits and tried to put her back together with superglue. Which is a lot trickier than it sounds. Holding Barbie upside down, I balanced her leg assembly in her hips, then put the glue on the pieces. And then held it all together for the required sixty seconds. Pulling my fingers away too early -- which I did more than once -- meant that the whole process had to be repeated. Again and again I tried. Finally I succeeded, and Barbie was more or less fixed -- and all I had to do was keep her in that upside down position for another 24 hours while the glue cured.

I realized that I should have thought about that before I started.

So, holding Barbie in one hand, I hunted through the house for something that would hold her in the right position. A vase? A glass jar, a -- ahah!

Which is how Barbie ended up wearing only a bra, upside down in a beer glass. 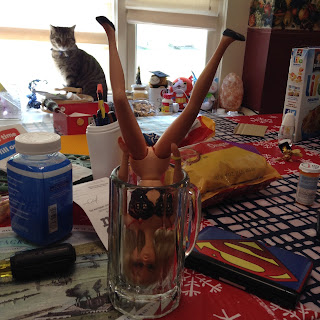 Posted by Dragonwriter at 7:42 AM