The theme of the convention this year was "The British Invasion." The GOH was Simon Green, but I must admot that I had not read any of his stuff before the convention, and I didn't see enough of him during the convention to convince me to go read his stuff. In truth, I don't think I ever saw him, unless he was one of the non-descript people roaming the hallway. His presence was not major, I fear. 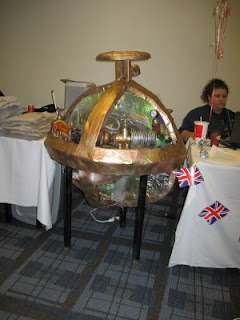 In fact, there appeared to be rather of lack of professional people this year. This did not keep us from having a good time, but it did weaken programming considerably. 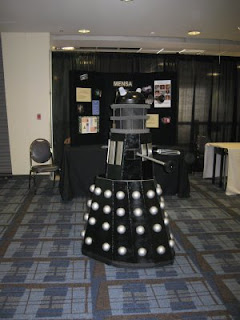 <- EXTERMINATE!!!!!
There were an amazing number of Daleks running around the convention. This one was a remote control robot, as were most of them, but at least one was a costume with a person inside. And yes, it was a Hall Costume. 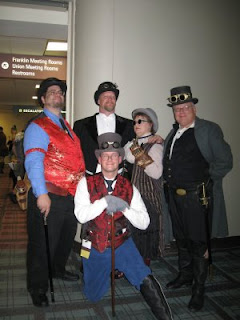 Steampunk was also popular. I am quite tempted to learn to solder so I can build a deathray for next year's convention. Victorian outfits tend to violate one of my rules for hall costuming, that the costume should be not only tolerable but comfortable, but my daughter wants to dress up as an Victorian Explorer, and that outfit has possibilities. 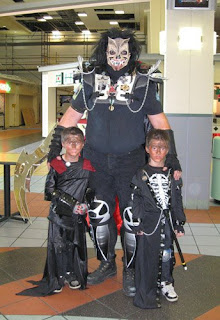 There were a surprising number of children at the convention, especially compared with just a decade ago. Fans are actively reproducing, an draising their children to follow in their footsteps. I saw some adult child costuming, and these were my favorites. 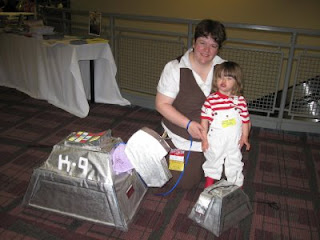 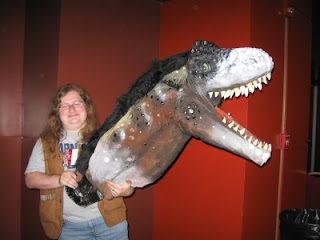 And there was the Costume Contest, which was very good this year. This is only the head portion of a full-body dinosaur costume that the woman wore on stage. Very, very impressive.
Posted by Dragonwriter at 7:33 AM