This is a con report for Marcon 2010, which was held over Memorial Day Weekend. I'm still pretty exhausted from the convention, so I'm afraid that this will be a rambling report. 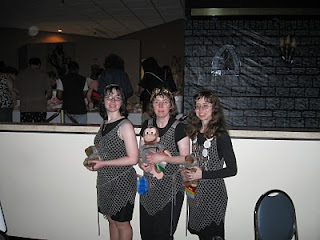 The four of us -- myself, hubby, Janette, and Elizabeth -- arrived at the convention center in mid-afternoon. We checked into the Drury, which is a nice hotel on the far side of the Convention center. We like it because it is separate from the convention hotel, and thus quieter. Non-hotel guests cannot come there, so it's more private. And it comes with a free breakfast, which is very nice. The hotel is quiet for another reason -- it used to be a parking garage. The lower floor still are, but the upper floors have been converted to rooms. Since the floors were made to hold automobiles packed close together, they don't shake when people walk on them. No elephants.

Janette had two panels on Friday night. I attended most of the first, which was "Growing Up Geek, " which I got to late due to plumbing problems that Mr. Bean would have appreciated. The second one was Dr. Who, and by the time I got to the panel, there were people standing at the back and sitting on the floor. I heard that there was an official account of 68 attendees, but there could have been more. Unfortunately, by then my migrane was screaming, and I couldn't stand to be in the room. It does appear that I missed a good panel.

On Saturday, Elizabeth, Janette, and I were Chicks in Chain Mail, courtesy of Victoria's Secret Forge, run by Jeff Toliver. We wore steel chain mail dresses. They wore pretty well -- but alas, I cannot afford a full dress.

Maybe a belt, someday. Or a chain mail bra.

On Sauturday morning she had the panel for the Big Bang Theory. I caught some of it, but found myself with a crises of my own. I was in charge of a panel which was using Powerpoint Presentations on my laptop, and when I tried to open Donna's powerpoint, I discovered that my version of Powerpoint was incompatible with hers. Luckily she had her work laptop with her, and was able to convert it to the proper format. I did not know the other two panelists, and so prayed that they would be bringing Powerpoints in the proper format. 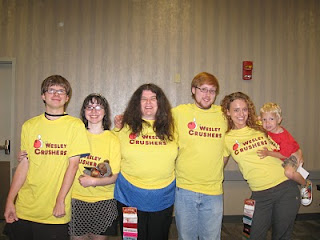 After this panel I managed to run through the huckster room and get some lunch. At one o'clock I had my first of three in a row panels, H.P Lovecraft. The panel went well, though not much was expected of me. The moderator appeared to be the expert and did most of the commenting, but some interesting stuff was shared. Oddly, I seemed to be the only panelist who was wowed by Lovecraft's technique. Otherwise, we just talked about what we liked in his stories.

My Little Cthulhu was appreciated.

Unfortunately, I had to pack up and leave before the official end of the panel, as the moderator thought that the panel ran for an hour and a half, not an hour and fifteen minutes with a fifteen minute break in the middle. And I had to grab a bottle of water and rush to my next panel, which was in kids programming. There Donna and I drew dragons with the kidlets and discussed how to make them believable. At the preschool level.

Then it was off to Biological Oddities, the panel with the slideshows. Where we discovered that it was a good thing that I had brought a pocket projector for the panel. It was dimmer than the full-sized projector, but it worked. And gave a very nice image if the room was dark. And since we didn't have to figure out how to work the projector, we could focus on the other major problem, which was that both of the other two presentations had to be converted before they could be shown. Donna worked on her laptop while I did my presentation.

There weren't a lot of comments from the audience, but hardly anyone left, so I think we kept the interest. I hope we do that one again.

I came out of that panel with a need to visit the bathroom. Unfortunately, the bathrooms were on the other side of an endless parade of zombies stumbling through the convention hall. No, not the OSU students out for the summer. About a thousand or so walkers had dressed as Zombies and walked from City Center to the convention hall. Sadly, I was wearing out at the time, and did not think to grab my camera.

No, I didn't get a lot of pictures this year.

Thanks to the Zombies, I was late to Janette's panel, Is There An Age Limit on Fandom? Apparently, there is not. Afterwards we got dinner, and then off to the Masquerade. Because I am short -- though not clinically so -- I usually like to stand in the back, leaning on my cane if need be. Not this year. I was completely worn out. I asked for short people seating, and the usher accidentally seated us in the special needs section, so that we were asked to move when there no more seats available. By that time, I hurt so much that moving was a real problem.

The masquerade was okay, but it has definately lost its magic. Every year there are better costumes, but fewer ones. This year there were eight or nine entries. Considering that Marcon is a regional con, that's really sad.

On Sunday, I participated in author readings and went to a panel on music and writing. It was on Sunday at Four o'clock, so having any audience was a plus. A pity, as it was a very interesting panel. The panelist talked about how they used music to define their characters.

We stayed over Sunday night so that the girls could participate in the Dead Dog Party, and so that I wouldn't have to drive home exhausted. It also gave us the chance to visit Schmidt's Sausage House. Maybe today I can eat...

Helen
Posted by Dragonwriter at 11:26 AM