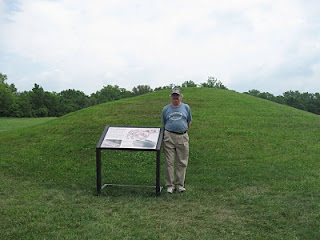 You can do a lot of research for stories online, at the library, and from your own TV. But sometimes, in order to get the right feel for a story, you have to go onsite and experience what you want your subjects to experience. Objects should be felt, held, and sometimes smelt. Places should be stood in. Food should be tasted. You'll never know the small details, such as how it feels to be bitten by the bugs of the region, unless you actually go there.

For that reason my friend needed to do some research on Indian mounds. he picked me up and we drove out to what was not the nearest site, but the place with the greatest number of mounds: The Hopewell National Historic Park. This National Park hugs the Scioto River Valley, and covers five different Indian mound sites. Two were closed, as they were in the midst of active preservation, but the other three -- Mound City Group, Hopewell Mound Group, and Siep
Mound – are open to visitors. 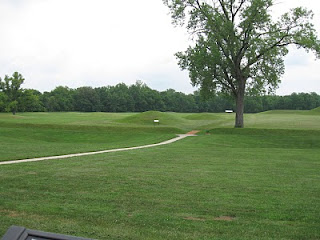 We drove in from Dayton on US35, turned onto
Highway 104, and drove past two large correctional institution complexes, missed the turn into the park due to construction, drove past a smaller correctional complex, turned around, made our back to the park and dodged the construction equipment to turn in. The park itself was worth the trouble to reach it, though. To the front was a nice, air conditioned visitor's center staffed with friendly park rangers. There was a small museum, a well-stocked gift shop in the lobby, and clean bathrooms. To the side was a shaded picnic area, where we ate lunch. Behind it stretched the well-manicured grounds of the complex, with informative signs on most of them. Even the maintenance workers were friendly, and told us to go down to the river walk where there was a shaded view of the river. 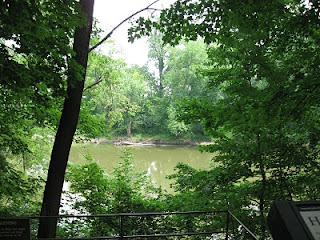 There are 23 mounds at the Mound City Complex. The Hopewell Indians lived in this area between 200BC and 500AD. Using nothing more than simple digging tools, baskets, and a lot of hand labor, they built large mounds of dirt which have lasted for over 2000 years. The mounds were used for burials and other ceremonies. Originally the burial ceremonies took place in charnal houses which were then burned down, and a mound erected over the site. Often artifacts, such as carved effigy pipes, were buried in the mounds. The taller mounds were built in several layers, apparently over several generations. It is thought that the taller mounds were built to honor important people. A monument, perhaps like the pyramids, to mark the final resting spot of a great chief.

I rather have the idea that these mounds grew over time as first mourners, then respectful visitors, added bucket after bucket of dirt to the mounds. This idea does not come from archaeological evidence but from human psychology. Our tendency to pile flowers and other artifacts at gravesites did not start with our culture,

At the end of the lifespan of this spot, the practice of burial had changed. Instead of building new mounds for people, they were cremated and their ashes interred in the tops of existing mounds.

We next went to the Hopewell Mound Group, following a map provided by the Visitor's Center. There we found a site that was much more in its wild state. A well-maintained gravel path led along the high outer wall and a road cut through the center of the enclosure, but high prairie 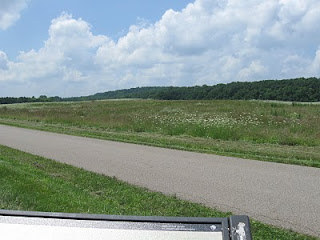 grasses hid most of the features of the land. The largest mound was just visible curving up above the grass. In its own way, this was quite valuable for research, as it showed how an undeveloped site would look. And also why so many of mounds go without notice until they are torn open and the artifacts spill out.

The third site, Siep Mound was memorable in several ways. The first is that it contained a relic of Ohio Travel from the last century. As recent as the nineteen eighties, the only rest stops along I-71 in Ohio were latrines, and they can still be found along country roads. On the plus side, it was nice to have something. On the minus side, well, if you've ever visited a permanent latrine... 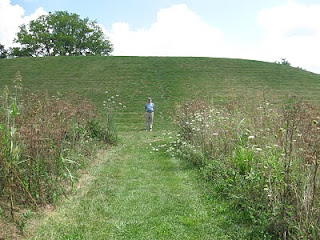 The mound itself was well worth seeing. It's elliptical, tall, and could have been used to stage outdoor dramas and other ceremonies. As my friend declared, “Jackpot.”
Posted by Dragonwriter at 6:24 PM